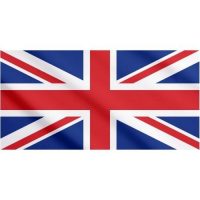 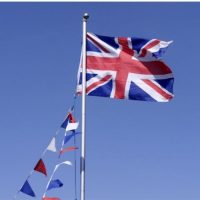 Our pick of the Union Jack flags on the market! A high quality flag that has been made especially for use outdoor. It has been stitched with thick 165 g/m2 (GSM) woven polyester material. This Union Jack Flag is durable long lasting and suitable for a variety of climates.

The Union Jack flag combines the crosses of England, Wales, Scotland (Northern Ireland joined the union in 1921). This was combined with the previous Union Flag of St George and St Andrew, after the Act of Union of Ireland with England (and Wales) and Scotland on 1 January 1801.

1) The cross of St George, a red cross on a white ground.

2)  The cross saltire St Andrew, patron saint of Scotland, is a diagonal white cross on a blue ground.

3) The cross of St Patrick, patron saint of Ireland, is a diagonal red cross on a white ground.

The Union Jack Flag is one of the most recognisable flags to be flown across the United Kingdom of Great Britain, Northern Ireland and the rest of the world.