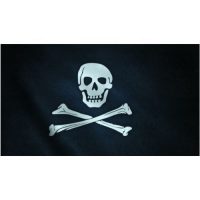 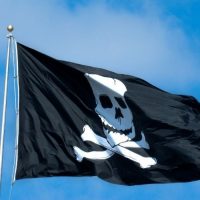 This Jolly Roger flag has been selected for combining excellent durability with low cost and an attractive appearance.

The flag is dyed on a 200 denier nylon to high specifications for a longer life and better appearance. Professionally sewn and finished with strong canvas heading with two brass grommets.

The Jolly Roger flag was once flown to identify a pirate ship about to attack, during the early 18th century. The black colour signifies “surrender at once”.

The familiar Jolly Roger flag most commonly identified the skull and crossbones symbol on a black flag was used during the 1710s by a number of pirate captains including Black Sam Bellamy, Edward England, and John Taylor. It went on to become the most commonly used pirate flag during the 1720s. Many of the original pirate designs were on a red flag, (French term “jolie rouge” or “pretty red”). It is believed that this influenced the English term Jolly Roger, which came to represent most pirate flags, especially those with skulls or skeletons.

The Jolly Roger is also an associated sign of danger and death, in the late 1800s, the symbol became commonly associated with poison. The Nazi’s also used the skull and crossbones to represent their SS death head divisions.